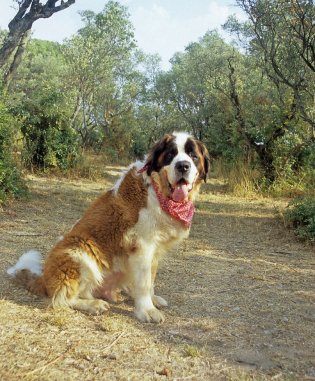 Eddie lay on his tummy and cried hard. His arms hurt, and he had stings all over his head and face. The stings made his eyes swell shut. He even had stings on his legs and feet. He hurt so badly he thought he couldn’t bear it. And there was no one to help him. He couldn’t go looking for Nellie because he couldn’t see.

He began to shake with cold, even though it was a very hot day. He said, “Jesus could You help me? I know I disobeyed, but I need Your help. Please.” Then he cried some more.

As he lay there helpless, he suddenly sensed something nearby. He heard leaves crackling and sticks being stepped on. A moment later he felt a big, long, sloppy tongue licking his face. Warm breath covered him in big panting puffs. “Oh Bum, you’re here. Help me, Bum.”

Then he heard Nellie’s voice calling, “Bum, where did you go? Bum!”

Bum gave a big throaty bark, and in a moment Nellie was kneeling beside Eddie. She said, “Eddie, your eyes are swollen shut. What happened to you?”

“Hornets, Nellie,” Eddie said through his sobs. Nellie looked at Eddie’s arms and face and decided it certainly was hornets, lots of hornets.

“Eddie, Bum came after me,” Nellie said. “He wouldn’t leave me alone until I came with him. He wanted me to help you.”

Eddie put his arm around Bum’s neck and hugged him tight. “Thank you, Bum. I thought you ran away and left me. Thank You, too, Jesus. You were helping me even before I asked.”

Nellie looked at Eddie and decided he probably could walk even though he couldn’t see. She said, “I’ll lead you by the hand, Eddie, and we’ll soon be home.”

Everyone was especially kind to Eddie and Bum that evening. The pie tasted extra good for some reason. Eddie quietly wondered why he didn’t get into trouble for wandering away from Nellie when he was supposed to be helping her. He decided everyone thought the hornets had already punished him and that he would be more helpful from now on.

As soon as Eddie healed, he and Bum started exploring again. The days were warm, but the woods were cool and shady, so the boy and dog spent a lot of time there.

One day as they snooped around near a deep pond, Bum spied a rabbit and took off after it.

Eddie didn’t notice when Bum ran away since he was busy sticking his toes into the edge of the pond. He didn’t have to take his shoes off because he was already barefoot. None of the boys wore shoes in the summertime.

Papa had told Eddie that the pond was a very dangerous place to play. He said it was too deep in the middle to find the bottom. He also said that wading around the edge was safe. The water felt good to Eddie’s feet as he walked along, carefully watching the bottom so he wouldn’t step into any deep spot.

Eddie walked a long way until he noticed there wasn’t any deep pond anymore. Just a little stream he could easily jump across. He went across and played.

After awhile Eddie felt his stomach telling him it was time to go home, so he started back. He walked and walked, but he kept seeing the same things. He finally realized he was walking in circles. He didn’t know which way to go to find his log house.

“Bum! Bum, come and help me find the way home.” Eddie looked around and didn’t see Bum. In fact he couldn’t remember just when he had last noticed the dog. It must have been a long time ago.

Eddie sat down on a log, put his elbows on his knees, and leaned his head on his hands. He wasn’t frightened. He was used to the woods. But his stomach growled harder as the minutes went by. He wanted something to eat.

When he looked up, he noticed a big blackberry bush that still had berries. They were nice and fat and black. But they were high on the bush. Eddie climbed over the lower branches as best he could in his bare feet. He got thorns in his feet, but he wanted those berries. He was very hungry. He ate all he could hold and then began walking and looking for home again.

He walked a long, long time, but the threes and bushes all looked alike again. He realized he was still walking in circles. After awhile the sky began to grow darker, and the trees didn’t look as pretty as they had earlier. In a little while he couldn’t’ see very well anymore, and then he did get frightened.

He sat on a log again and thought. “Should I ask Jesus to help me?” he wondered. “No, I’m always bothering Him.” Eddie didn’t understand that Jesus is never too busy to help us.

Eddie sat there for a long time wondering what to do. He wondered if Papa had missed him. He wondered if Nellie had fixed a good supper and if they had eaten it without him. He heard some strange sounds in the dark, silent night. Pretty soon a tear rolled off the end of his nose and dripped onto his arm.

Finally Eddie decided he would have to ask Jesus to show him the way home. He looked up into the star-filled sky and said, “Oh, Jesus, won’t you help me just one more time? I’ll try hard not to bother You anymore for a long, long time. Honest, I will, Jesus.”

Just then Eddie heard a big, deep bark. That was the nicest sound he had ever heard. Ever. In a moment Bum nuzzled Eddie and kissed him with his big wet tongue. Eddie put his arms tight around Bum’s neck and hugged him.

Bum stayed only a moment, then jumped up and started off through the woods. Eddie cried, “No Bum, come back. Don’t leave me.”

But Bum didn’t leave Eddie. He only ran a little ahead of him and then went back to be sure Eddie was all right. He led Eddie home that way. Eddie hurried as fast as he could go, but Bum’s four legs traveled eight times faster than Eddie’s two.

Finally after a long run, Eddie saw the light in the window of the cabin. He took a deep breath and ran even faster. He was so eager to be back with his family again.

Eddie ran up to the cabin door and burst inside, making sure that Bum got in before the door swung shut. When he got inside he found everyone sitting around crying. Nellie was crying loud, like something was hurting her a lot, and Papa and Al were wiping their red eyes. What could have happened while he was gone to make everyone cry?